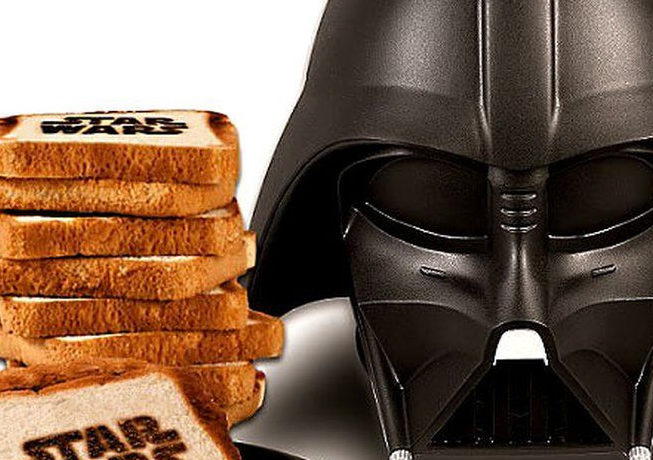 May the festive force be with you

With the new film Star Wars: Rogue One being released on the 15 December of this year, you can expect there to be a lot of hype around Star Wars merchandise. For Star Wars geeks this is heaven, and it has come just in time for Christmas. Why not gift your very own Star Wars fan with the ultimate Christmas present? From gadgets to state of the art tech, gaming accessories, LEGO, homewares, clothing and more, this is a small taster of what you can find on the high street to make it a Christmas to remember. Hit the pavements, and may the force be with you, just don’t look for the toaster in the UK as you’ll be hard pushed to find it!

There are Star Wars gadgets, robots, PC’s, drones and speakers all infiltrating the high street. Our favourite Star Wars tech includes the much sought after Sphero BB-8, HP’s Special Edition Star Wars Laptop and the Millennium Falcon Drone. These are big toys for big kids, so shop around to get the best price.

One of Star Wars’ best loved characters, BB-8, is a spherical droid with a sense of humour in Star Wars: The Force Awakens. Treat someone to the remote control version of the droid and watch him or her have hours of fun. This small ball-like gadget can be guided via a smartphone, responds to voice commands, and can also project video footage.

HP has launched an official Star Wars laptop. The 15.6in model has a “battle-worn” distressed design with “Galactic Empire” written in the Aurebesh font on the hinge and Stormtroopers on the keyboard deck. The touchpad design mirrors the X-Wing Star Fighter Guidance System and the red backlit keyboard completes the dark-side design. This is the geek chic of laptops.

Of all the spacecraft from the Star Wars universe, the Millennium Falcon is the most iconic. If someone you know has ever dreamt of piloting the fastest hunk of junk in the galaxy then this is the perfect gift for him or her. This new drone version of the Millennium Falcon by Thinkway Toys can fly and perform a few cool manoeuvres.

These Star Wars speakers not only look super cool they sound powerful enough to propel music through space. The design features a light up speaker and a clear stand so it looks like it is flying through the galaxy. It has a rechargeable USB with 8 hours play time, so you can take it anywhere on the planet and listen wirelessly from up to 30ft. It has an easy Bluetooth setup from an iPod, smartphone or table plus a standard 3.5mm jack to connect devices without Bluetooth. Whoever you buy this for will love the built-in microphone that connects with Bluetooth enabled phones so they can Facetime or Skype as well.

Almost every Star Wars fan loves C-3PO. These speakers are beautifully designed, can act as a hands-free speaker for calls, as well as playing music in high quality. The head’s eyes light up when turned on and it’s easily charged via USB. It may be pricey but it is worth it for the audio quality. This is another tick in the box for grown-up Star Wars fans.

BUILD A GALAXY WITH LEGO

Many a man and child will come into their own when it comes to LEGO, and mastering the force of Star Wars LEGO will provide hours of fun and creative play for adults and children. There is an abundance of LEGO Star Wars play sets on the high street for all different ages, featuring vehicles, minifigure characters, locations, and buildable figures from the Star Wars films. If you’re after a few hours of peace and quiet in your home, then snap up one of these masterpieces from toy shops and departments stores. Hunt around for special offers and Christmas price promotions, as you’ll find many will have money off.

Battle the forces of the First Order with Poe’s X-Wing Fighter. This customised starfighter is packed with features, like the 4 spring-loaded shooters, 2 stud shooters, retractable landing gear, opening wings, opening cockpit with space for a minifigure and space behind for the BB-8 Astromech Droid.

There are hundreds of incredible Star Wars LEGO sets, but the ultimate LEGO craft in the galaxy has got to be the Millennium Falcon. This is the mother ship of all LEGO sets with over 1300 pieces. If you’re buying for a child then be prepared to help them, just try not to take over and do it all yourself!

Another amazing Star Wars set is Slave 1. It features a rotating cockpit and wings for flight and landing mode, plus dual shooters and hidden blasters to repel attackers. Perfect for big kids who want to re-enact the capture of Han Solo in Star Wars: Episode V The Empire Strikes Back. Complete with a display stand it includes 4 minifigures with weapons: Boba Fett, Bespin Guard, Stormtrooper and Han Solo.

Anyone of any age can take on the Empire with this buildable Jyn Erso figure. Featuring a blaster rifle with spring-loaded shooter, wheel-operated arm-swinging battle function, and detachable back-mounted truncheons, this durable figure is just the thing for recreating intense battles from the new movie, Star Wars: Rogue One.

FEEL THE FORCE AT HOME

From lighting to soft furnishings, bedding, kitchenware and more, Star Wars merchandise could infiltrate every room in the home. We love these gadgets for the home because they are quirky and a little different, and a little more exciting than an ordinary mug.

If you want to bring a little light into the darkness, then this Death Star desk light will do the job splendidly. It is fun, stylish and just a little kitsch.

Feel the Force watching over you at home with the LEGO Star Wars Yoda Minifigure Clock. The perfect addition to every LEGO Star Wars collection, this Jedi decor features a digital, lighted display and alarm clock and is a great gift for any LEGO Star Wars fan.

BB-8 lovers will adore this a cool little BB-8 light. The cute astromech droid from Star Wars: The Force Awakens is laser etched onto an acrylic panel, which when lit in orange LED gives off a 3D effect. It won’t fill a whole room, but it’s a cool little mood light or display piece and can be powered by USB or batteries.

MUST HAVE TOYS FOR HOLIDAY FUN

Get the family gathered and the drinks flowing and have some festive Star wars fun.

Think of Star Wars and you’ll think of a Lightsaber. There are many Lightsaber replicas to choose from on the high street ranging from £7 to over £200, but this toy version from Disney, modelled as Rey’s saber from Star Wars: The Force Awakens is ideal for anyone aged 8 to 80. Whoever receives this gift will be eternally grateful to you.

A best selling family game is always a hit and this Star Wars Monopoly is a great way to conquer the Star Wars galaxy. This hyperdrive version of the Fast-Dealing Property Trading Game allows players to be on the Rebel or the Empire side, with a mission to conquer planets and build bases to dominate the universe.

HAVE THE LAST LAUGH

Lastly, if the Star Wars addiction of the man in your life is getting you down then why not have the last laugh and trawl the high street fashion chains for some novelty Star Wars merchandise specifically targeted at grown up men. A little more kitsch than cool you’ll find fabulous festive jumpers, cosy bathrobes and silly socks, perfect for anyone with a sense of humour a love of Star Wars.